Diabetes:  What It Is, Prevention, and Its Affect on the Eyes

What is Diabetes?
Diabetes is the condition in which the body does not properly process food for use as energy. This causes glucose (sugar) to build up in the blood. Too much glucose in the blood can cause damage throughout the body, including the heart, kidneys, feet, teeth, skin, blood vessels in the body, and the small blood vessels in the eyes. In the United States alone, there are 29.1 million people diagnosed with diabetes and it is the seventh leading cause of death.

Can Diabetes Be Prevented?
Type 1 Diabetes (a total lack of insulin available to control the body’s glucose levels) cannot be prevented but those with the disease can help prevent or delay the development of complications by keeping their blood sugar in a target range and by having regularly scheduled medical exams and dilated eye exams to detect early signs of complications.

Type 2 Diabetes (insufficient insulin in the body or the body unable to use it as it should), on the other hand, can, in most cases, be prevented. Research studies have found that moderate weight loss and exercise can prevent or delay Type 2 Diabetes. According to the Diabetes Research Council, with the correct treatment and lifestyle changes, many people with diabetes are able to prevent or delay the onset of complications. For more information on a “wellness approach to diabetes”:  https://www.diabetesresearch.org/document.doc?id=260

Does Diabetes Affect the Eyes?
Diabetes does affect the eyes and can cause cataracts, glaucoma, and diabetic retinopathy.

What are Cataracts?
Cataracts is a condition where the eye’s naturally clear lens becomes cloudy, or opaque. With diabetes, uncontrolled blood sugar levels speed up the development of cataracts in adults and younger people as well.

What is Glaucoma?
Glaucoma is a disease that occurs when too much fluid builds up in the front part of the eye. This fluid buildup increases the pressure within the eye, which, in turn, damages the optic nerve. According to the National Eye Institute, glaucoma is sometimes called “silent thief of sight” because it slowly damages the eyes and can cause irreparable harm before there are symptoms.

There are treatments to delay vision loss, but no cure, making it a leading cause of blindness all over the world. According to the Glaucoma Foundation, there is considerable evidence that having Type 2 Diabetes along with the duration of the disease, and having uncontrolled blood sugar levels increases the risk of developing primary open angle glaucoma (the most common type of glaucoma).

What is Diabetic Retinopathy?
Diabetic retinopathy is a condition of the eye in which the blood vessels in the retina swell, leak, close off completely, or abnormal new blood vessels grow on the surface of the retina. Between 12,000 and 24,000 new cases of blindness from diabetic retinopathy occur in the United States each year, according to the CDC, and many could be prevented with early intervention. But a significant percentage of Americans with diabetes are not aware of their risk of vision impairment from the disease.

Oftentimes there are no visual symptoms with diabetic retinopathy, but an examination of the retina can reveal the tiny dot and blot hemorrhages in the eye. 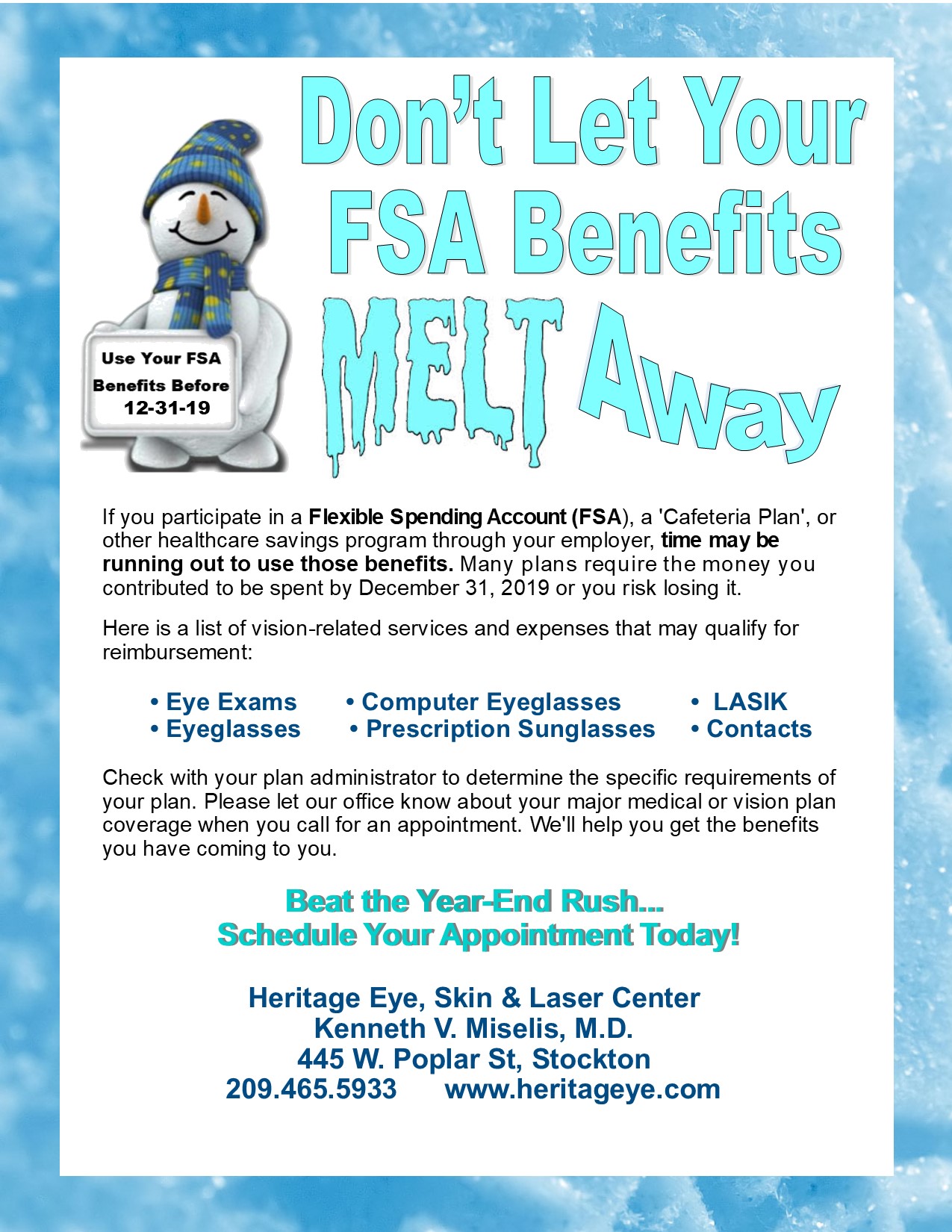 Don’t Let Your Flex Spending Money Melt Away! Use it before December 31, 2019!

Don’t Let Your Flex Spending Money Melt Away! Use it before December 31, 2019!