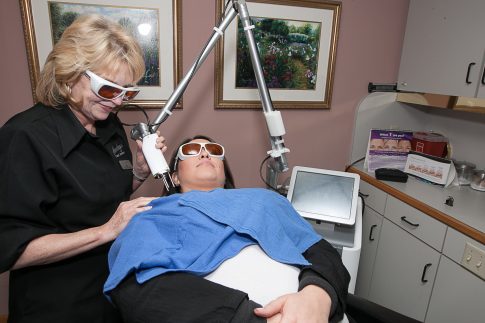 Check Out this Article In The Central Valley Business Journal!

STOCKTON — Following the wave of popularity tattoos have enjoyed comes a second wave — getting rid of them.

That new wave has opened a business opportunity for Stockton’s Heritage Eye, Skin and Laser Center.

Heritage purchased an Enlighten laser last September. It is a dual-wavelength and dual-pulse duration laser system, designed to be especially effective at removing tattoos. Heritage is the first skin center in the area to have one.

“People from all over Northern California come to the facility for its tattoo removal services,” said Judy Howard, a registered nurse at the center.

Nearly half of millennials in the United States have a tattoo, according to a 2015 Harris poll. Three in every 10 Americans have at least one, and among those with ink, more than 25 percent have regrets.

The American Society of Aesthetic Plastic Surgery says tattoo removal is on the rise. Often people regret getting tattoos because they’re worried they’ll have a more difficult time getting a job. In other cases, they were following a fad. The fad has moved on, but they’re stuck with the ink.

“People from all walks of life have ink,” said Howard. “Some are tired of looking at it. Some people just want to clear real estate to make room for other tattoos.”

Howard said she also removes a lot of gang or prison tattoos.

When it comes to removing tattoos, lasers are the only effective method, Howard said.

Getting a tattoo removed is not an overnight process, said Heritage Eye, Skin and Laser’s Medical Director and surgeon, Dr. Kenneth Miselis.  It requires multiple appointments. At minimum, patients must wait two months between sessions to let the skin properly heal.

Howard has removed tattoos in as few as two sessions and as many as many as 21. Each appointment can last anywhere from two minutes to an hour.

The differences depend on the size, age, color and depth of each tattoo, as well as the skin’s healing process, which is different for everybody. To get an estimate, consultations are recommended and free of charge.

Heritage Tattoo Removal Center works also with the Modesto-based organization, Peacekeepers and Stockton’s El Concilio, to provide free tattoo removal services for former gang members and inmates who want to get back to work and are committed to the removal process.

Lasers help to slowly remove ink by delivering energy at short intervals to target ink pigment and break it into smaller particles that can then be absorbed by the body. It only affects targeted tissue, and does not damage surrounding skin. The process is called photothermolysis and is also used in hair removal.

“Think of ink like a rock,” Howard said, “Lasers with nano or Q-switches break big rocks into little rocks. With pico technology, these smaller rocks are turned into sand. When turned into sand, there are fewer treatments (needed).”

The pico technology innovation behind the Enlighten laser, according to its parent company Cutera, is that it delivers maximum energy at a trillionth of a second, called a “pico-second.” Other lasers dispense energy in nanoseconds (one billionth of a second).

Compared to other levels of lasers, Enlighten lasers can reduce the number of treatments by half or more. Because it takes two months between appointments, “this can be a big time saver,” said Miselis.

“On the cosmetic side, (approximately) 25 percent of business comes from tattoo removals,” said Miselis.

The center uses many types of lasers for its hair, eye and skin treatments. Enlighten is the most efficient, and though it is more costly than other laser treatments available at Heritage, it is more effective Howard said.